It's been such a long time since I've posted anything that it may seem as if I've staged my own death. But it's nothing so dramatic. It's simply that I've been so busy with other work this year that the blogging has suffered. 2015 was a sad year. There was the loss of a colleague at work through cancer and numerous office upheavals with various staff leaving. As well as this the phone would ring at unexpected times and bingo, I'd be called in to work. Not that I'm complaining as the library helps us to pay the bills but deadlines were continually stretched and my reading and writing suffered. At times I've felt as if 'library world' was dragging me along screaming and kicking and I had no time to read at all. 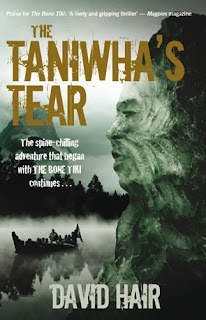 But there were some gems that I managed to find. Among them was David Hair's The Taniwha's Tear. This is the second book in this fantasy series, Aotearoa, set in New Zealand, and it was a cracker of a read. The Taniwha is a giant lake monster from Maori legend that comes alive in the story. The pace is relentless and the characters are lovable.

A Kind of Eden was a story by Amanda Smyth, set in Jamaica which was another beauty. It was a story heavy with pain and indecision and a terrible outcome for the protagonist's daughter but the tale left me with a lasting impression. Although I've already written about this one, its praise needs repeating. It was a great read.

One book I read and enjoyed by Australian author Kate Constable was New Guinea Moon, a coming of age story set in the 1970s in PNG. I'll have to devote a whole post to that one. It was also worth reading.
For the Forest of a Bird is another island story that I read and enjoyed. It's a gentle story about belonging and family life and where you fit when family dynamics shift. I actually know the author, Sue Saliba, as she is a patron of our library. The natural environment of Phillip Island inspired her to write this one and if you are after a heart-felt tale that's big on emotion, this one could be a story you'd enjoy.
And I finally got to read Maggie Stiefvater's The Scorpio Races in 2015. Lots of blood and gore but a rollicking good tale about giant mythical horses that come out of the ocean and are as fast as the wind. I loved it.
So that was my tally of terrific island reads for me in 2015. Hopefully I'll get my act together and start blogging more regularly now. New Year's resolutions and all that...
Posted by Beth Montgomery at 12:28 PM