Anna Mackenzie is a New Zealand author who writes for teenagers (just like me). Anna's third book, The Sea-wreck Stranger, won The 2008 NZ Post Book Award for children and Young Adults and the Sir Julius Vogel Award for Fantasy and Sci Fi. Maybe I seem to go on and on about this book, but it is one of my fav's and when Anna agreed to do an interview I was rapt. So here are her answers... 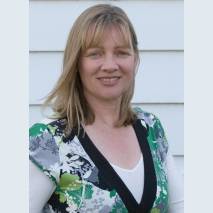 1.      The Sea-wreck Stranger is set in a future world. Are you naturally drawn to speculative fiction or was it hard to create this future island in your head?
came easily, as did the issues and challenges my characters face in this future – and not very happy – world. On an interpersonal level, the challenges are universal in terms of time setting, I think, but the environmental issues are more specifically located in a not very distant future. That the community in Vidya has responded differently to that on Dunnett is one of the underlying themes of the story – and one that gets further attention in the sequel, Ebony Hill.
2.       The island itself is very real. What is your inspiration for this setting?
Dunnett is an amalgam of a number of places I’ve lived or visited, with a hearty dose of imagination thrown in. I wanted to create a setting that could be anywhere – I think YA fiction works well when the reader can transpose their own familiar reference points into the setting, so I have tried to keep it non-specific. That said, the cave at one end of is a real place, and various aspects of the island’s topography and isolation are also taken from a real location.
3.      How do you go about forming characters for your stories?

I usually start with a single, simple idea. In the case of The Sea-wreck Stranger I was watching my children and their friends mess about on a lakefront, rummaging through items washed up against an old log. I thought ‘what if what you find is not what you expect?’, and the idea grew – quite quickly – into the novel. I walked back to the house with the plan of noting down the idea and wrote several chapters straight away. ’s character, and those of the people around her, formed immediately; plot came later.
The common model for me is that a character develops first, often simultaneously in my head and on paper, and as I write about them I ‘discover’ what their story is.
4.      How long does it take you to write a book? Can you take us through your process?
It varies a little. A first draft usually takes between four and seven months. I then spend a similar period of time editing and perfecting, including time when I set the book aside and ignore it. I sometimes have several books at different stages – I’ll be ‘ignoring’ one while I’m writing the first draft of another, so they leapfrog a little. The publishing process also works on different timeframes. My last few books have come out more quickly than my first.
5.      The sequel, Ebony Hill, has been released in NZ. Was it easier to write than The Sea-wreck Stranger? Can you tell us a bit about the story?

In Ebony Hill, we meet up with two years down the track – and discover, as has, that things are never simple or perfect. Vidya has high ideals and the community works hard to achieve them – but they, like the islanders, are struggling with a world in ruins. is unsure of her own place in her new society, and none of her uncertainty is helped by her confused feelings for Dev or by the arrival of an interloper who seems to both threaten and clarify her nebulous sense of belonging.
Just when she thinks she might have found a promising path, the world around her erupts into violence. Practical and ethical dilemmas force to explore her own beliefs and discover both strengths and weaknesses as she, and those around her, are tested to the limits.
Strangely, I found this second book harder to write than The Sea-wreck Stranger. This was partly because my plan was to write a sequel, and I consequently kept trying to make the next stage of ’s story fit into a single book. When I finally accepted that it wouldn’t – I’m just now finishing the third book of the trilogy – it became easier again. A great example of how, as a writer, you have to follow the story rather than trying to make the story follow a preconceived notion about it!
6.      What are your favourite stories?

When I was about 6 my father read us a novel by Joyce West called ‘The Sea Islanders’ which I remember as being about a family as warm and unruly as my own, and containing a signature refrain from the youngest child: ‘”I’m hungry,” said Rory.’
I studied William Golding’s ‘Lord of the Flies’ at school, and was disturbed by the author’s bleak subtext. As both a teenaged and adult reader I much admire Ursula le Guinn’s Earthsea Cycle (comprising two trilogies written 20 years apart), which offers a masterful example of the way fantasy can explore the realities of human nature and the trials and issues we all face in finding a path into adulthood.
Islands allow writers to explore the impact of isolation on individuals and social hierarchies – certainly true in The Sea-wreck Stranger, but also true of communities isolated by less physical barriers. Fleur Beale’s ‘I am not Esther’, about a closed religious community, is a chilling YA example. Amongst adult novels, Margaret Attwood’s ‘The Handmaid’s Tale’, set in a dark future offering a rigid and oppressive social hierarchy, stands out.
Stories speculating on dystopian futures influenced me from a young age – the TV series of the 1970s ‘The Survivors’ and John Wyndham’s ‘Day of the Triffids’ (also serialised by the ) – lived in my head for many years. And on dystopian future novels, I would be remiss not to mention Cormac McCarthy’s unsettlingly dark but masterfully written ‘The Road’. See the film if you will, but for sheer beauty of writing, read the book.
7.      If you were stranded on an island for a year, what three non-essential items would you take with you?
A clarinet (I’ve just begun learning, and stranded on an island, I might perhaps have time to make some progress! The great thing about a clarinet is that even when you’re not very good, the sounds aren’t too unpleasant.)
The complete works of William Shakespeare – for the beauty and cadence of his sentences, for his linguistic ingenuity, and for his acute observation and ability to generate phrases whose longevity often transcends an awareness of their source.
And thirdly, inevitably perhaps, notebooks and pencils.
8.      Why do you write for young adults?
There’s no simple answer. I like kids, I’m fascinated by human behaviour and motivation, and I think the teen years are incredibly interesting. It’s as teens that we make the choices that determine the adults we’ll become, it’s generally when we’re hit with a mountain of challenges and trials, and it’s when we build the resources we’ll need to cope with everything the rest of life has to throw at us. Growing up isn’t a straightforward business, but it’s something we all do (sooner or later). I think it’s a period of our lives that deserves as much attention as we can give it.
I also have two teenaged children, though when I began writing they were youngsters. They’re kind of useful though – as sounding boards, zoological specimens and reminders of reality.

9.      The Sea Wreck Stranger won many awards. As a writer, do you feel the pressure is now on you to perform?
Actually, no more than I always feel. I want every book to be the best it can possibly be – I’m sure every writer does. A book that’s not yet finished still has that potential; the pressure is always there. With every book I write, I aim to learn.

Posted by Beth Montgomery at 1:47 PM