Last year I met Wendy Orr at a writing workshop organised by our local Secondary College. Since then I have read and reviewed Nim's Island and watched the movie too. It's all good stuff! Thankfully, Wendy agreed to an interview for Island Stories.

BM   Do you plan your novels or do you follow where your writing leads you?

WO   I have a rough plan in my head, and often a lot of notes on different scenes, the character and their history. I have to know the start, a few key scenes, and the ending - though occasionally the ending changes when I get there. I start when I can hear the first sentence in my head (of course it's very rarely the first sentence in the book - it may be thrown out entirely, rewritten, or come much later in the book). But whatever happens to it later, when I hear it, I can set the tone of the book.  After the second or third draft, I can start more organised planning with time lines etc, if I need to.

BM    What is your typical writing week?

WO   I check my emails at breakfast and answer anything that has to get back to North America before they leave the office for the evening. I walk the dog after breakfast, and then sort emails into what has to be answered immediately & quickly, or questionnaires etc that can be done at the end of the week. I used to answer them immediately, update facebook & twitter, etc, but the volume is so overwhelming now that it would leave no time for writing, and I am now trying to go back to making the morning and early afternoon my primary writing time. I walk the dog again around 4 and try to get back to emails after that till about 6; I may do a few more after dinner. If I have copy-editing or proof reading with an urgent deadline I go back to work after dinner, and the emails have to wait. On the weekend I try to catch up with emails,  paperwork, questionnaires and preparing any talks for the following week, but I have also decided to start trying to take weekends off, and am considering allocating one day for the office work.

BM   What was your inspiration for Nim’s Island?

WO   Nim's Island was inspired partly by two letters from girls asking me to write a book about them. I said that I couldn't do that but I started playing the writer game of "What if" (two very important words in finding stories). "What if a girl wrote to an author and said "Could you please write a book about me?" and the author said, "No, because I'm a very famous writer who writes very exciting books, and since you're just a little girl your life would be much too boring." But what if the girl's life was more exciting than the author's?
I then decided that the girl's life was more exciting because she lived on an island, and I wrote the book all in letters between the girl and the author - which was very boring. Finally I remembered a story I'd written when I was 9, about a little girl running away from an orphanage to live alone on an island - and finally Nim's Island came to life.
So the inspiration was partly those letters, but the deeper inspiration was seeing a tiny little island when I was 9 and thinking that I'd like to live on it, because that's why I wrote that first story.

BM    Nim is a combination of techno kid and wild child. How did her character evolve in your mind?

WO   She came fairly fully formed. I think she was the nine year old child in me who wanted to be brave and resourceful and live on an island.

BM   Nim’s Island was first published in 1999. How did Universal Pictures come to make it into a film?


WO   Universal Pictures was the Australian distributor but not the producer.

WO   The book came out in the US in 2000 and won or was shortlisted for quite a lot of awards, including the Los Angeles Times Best Books for 2001. That meant it went into most libraries in Los Angeles, and was on display in the Santa Monica public library when the film producer Paula Mazur went in to get a book for her 8 year old son for the summer holidays. She took it home and started reading it to him, found the whole family was drawn in, and asked me for the film rights. We worked on the pitch together; she pitched it to several Hollywood studios, had interest from 4, and went with Walden Media, who specialised in children and family films adapted from literature. Fox then became a partner for US and international distribution.

BM   Did you have any input into the movie?


WO   I was a consultant and worked on the first two drafts of the screenplay with Paula Mazur and the screenwriter Joe Kwong.
BM   Tell us about the map you made of the island.

WO   I drew a map which I sent to Kerry Millard, the illustrator, and she redrew it to look good. I think the original map is in the Lu Rees Archives at the University of Canberra, where my papers are stored.
BM   The movie put a lot of emphasis on the author Alex Rover and her development throughout the story. Were you pleased with the script and its changes?


WO   I felt it represented my idea of Alex quite accurately, in a visual medium. Jodie Foster also happens to look very much like my conception of Alex!

BM   What are your favourite island stories?


WO   As a child, I loved Treasure Island, Coral Island, The Swiss Family Robinson, Robinson Crusoe... and later Lord of the Flies, in a different way. 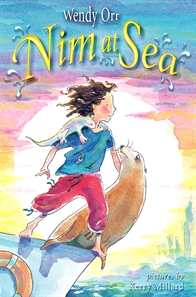 BM   Would you enjoy living on a remote island like Nim or are you more suited to civilization?

WO   Much as I love island life, or living in the country, and don't know how I'd manage living in a city, I quite like being within reach of civilisation.

BM   Are there are any film plans for the book sequel, Nim at Sea?

WO   We are working on it  now and hope that something may be announced quite soon.